Our lives are separate, but that is an illusion 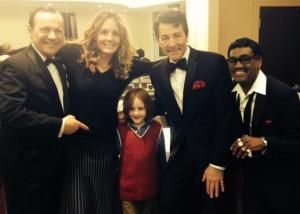 Dean Martin, Frank Sinatra and Sammy Davis, Jr. posed for pictures with guests as the performance ended. A night to be remembered.

Yesterday, I was outside in my bikini enjoying the sunshine in 70 degree weather. Today, it is rainy and cold. The contrast has my hands cold. I have my hat on, now, and a great big sweatshirt. It is January, after all. This is to be expected. Yesterday was not expected. And for that, I seized the day.

It had happened once before, in January of this year and I did not think it would happen again. But it happened twice, weather so warm it caused me to go get my swimsuit and delay the afternoon’s work. It is a winter I am unaccustomed to or, rather, the absence or lapse of winter. I know winter all too well on the hi-line of Montana or in the Northwoods of Wisconsin. Seventy degrees in January is to be celebrated, regardless of where I live.

Now, that is out of the way. I was reading an Andy Rooney commentary, this morning, on why women age 40+ are immensely appreciated. He started with the thought that a woman 40+ will never wake you in the night to ask what you are thinking because she won’t really care what you think. He also mentioned, “Older women are generous with praise, often undeserved. They know what it’s like to be unappreciated.” It’s good to be 40+. My mother told me it would be and she was right.

Now, that is out of the way. My youngest son, Clive, and I attended a Rat Pack Tribute this week with gifted tickets from a neighbor friend. It was a lovely experience and I thought it would be. Clive was certain he was the unluckiest kid to be requested to attend. He reluctantly attended but found himself laughing out loud at Dean Martin’s Jokes and enjoying the merriment of the music very much.

About half way through the evening performance, he began to rest his head on my shoulder. I reached out to hold his hand. My child was enjoying something even I had not seen before. I thought of my grandparents and how much they had loved Frank Sinatra. I thought of a time I had missed, in life. I thought of a simpler time when there was not such abundance of technology and overstimulation of media. Being in the restored Pines Theatre was a gateway into that simpler time and I found that as I entered that world I did not want to leave it.

Clive and I posed for pictures with the three entertainers. As the entertainers first stood on stage together, I couldn’t help but say aloud, “Wow.” As I approached Frank Sinatra in the lobby, I was taken in by his presence. He was elegant, a glimpse into a quality that was more common in a different time. Dean Martin was quirky and funny! That took me by surprise. I feel a little preoccupied with Dean Martin, at this time, and trying not to be. Clive’s favourite was Sammy Davis Jr.

To test my memory, I will recount for you some of Deano’s jokes:

Dean: Uh, so Frank .. the last time I saw you we were at a Halloween party.
Frank: Yeah.
Dean: You were wearing two kilts.
Frank: I was going as a “Double Scotch.”

Dean: A man I know has been married for 47 years. That’s a long time and I started wondering if going into the marriage he had thought of a plan. I mean, you must have a plan for it to last that long. So I asked him. He said,”Yeah, I had a plan. She would handle all of the little decisions and I would handle the big decisions.” And I asked, “How did that work? What kind of big decisions did you make?” To which he replied, “Well, we haven’t had any big decisions yet!”

Big decisions, little decisions. It’s a matter of perspective. Big problems, little problems. That, too. Perspective. Perspective changes. Experience can cause us to see things in a different light. Enjoy your life. Know that you will be okay. See those you love. See them. Choose them. Go places together. Shared experiences are a fruit of life, or should I say they are part of the root system of life from which much fruit will be given. Yes.

Go somewhere today, try something different. And bring along someone you love. Invest in the root system of your life. Our lives are separate, but that is an illusion. Our lives are intertwined.